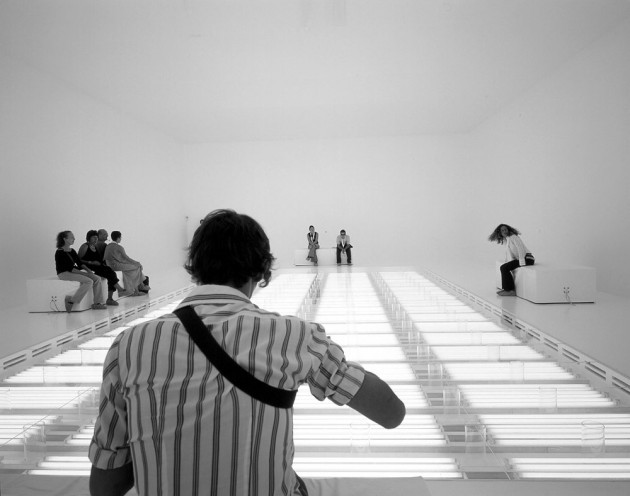 Philippe Rahm designs experiential spaces with invisible materials – instead of walls and windows he uses light, temperature, humidity and dynamic flow. The experiences originate from the biological body, are guided by hormone production and affect perception, consciousness and moods.

His works are poetic and beautiful, address thermodynamics, biochemistry and climate changes, and show us a future by merging of neuroscience and architecture. Maybe a new class of architects will emerge in his footsteps, with a new understanding of matter and it’s neurophysiological impact on humans?
“The hormonorium is a work on the disappearance of the physical limits between space and the organism revealed by biology and neuroscience. [..] Understanding of physio-chemical mechanisms governing organisms engenders a modification of the understanding of space and equally the understanding of our occupation of the environment. “ – [archinect]

He created the Hormonorium for the 2002 Venice Architecture Biennale. The space stimulates physical reactions in humans similar to those experienced on a mountain top of about 3000 meter altitude. A white room is illuminated with a floor of light tubes, generating a very intense light between 5000 to 10000 lux. The white light with UV rays stimulates the reduction of melatonin in the human body, which causes a decrease in fatigue, a probable increase in sexual desire, and regulation of our moods. The quantity of oxygen in the room is reduced from 21 to 14.5 percent, which also corresponds to levels found on mountain tops. This can lead to altered states of consciousness. Through the production of endomorphine a slight euphoria can be experienced. A slight hypoxia – body deprived of adequate oxygen supply – can manifest itself through confusion, disorientation or bizarre behavior.

“One had the impression of floating in space, of no longer knowing up and down.” 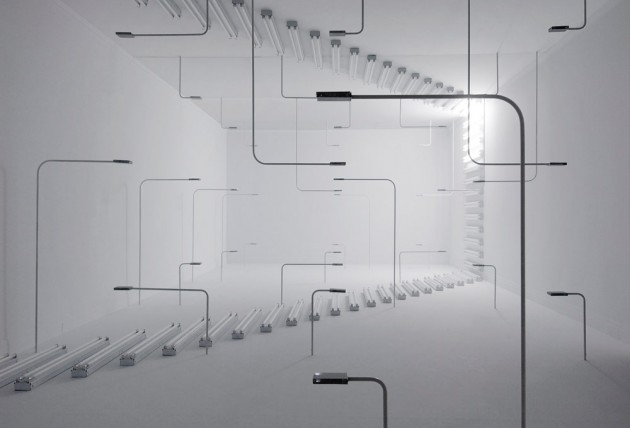 Interior Weather, Canadian Center of Architecture in Montreal in 2007


“The goal is to project an architecture that is capable of indicating possible uses of space which are dictated only by the chance confluence of three climatic parameters: temperature (celsius), light intensity (lux), and relative humidity (%), so that T * lux * HR = form and function. The installation is conceived as a study to test the potential of fluctuating climatic conditions to generate new functions, and thus new architectural programmes. “
“He took the concept behind the installation further with a museum installation that created a near-death experience (which is strikingly similar to severe alpine sickness): hallucinations of chime music, among other hallucinations, and euphoria created by the release of adrenaline (the lack of oxygen stimulates the production of adrenaline, at least partially explaining the allure of the S&M practice of choking). Only 6% oxygen was in the space, and despite promises of a euphoric near-death experience, no one went in.” – [Michelle Kasprzak]
“Onto the concepts of colors, structures, materials, we superimpose the concepts of temperature, light, relative humidity, which become new tools of the architectural design.”
– [archinect]
“[..] he declared the importance of destroying reality, analyzing the components, and recomposing with the elements of your choice to create a new shape or form. “ – [Michelle Kasprzak] 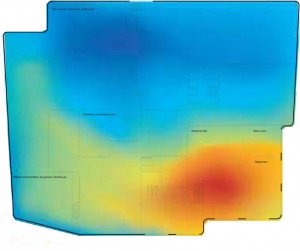 Convective Museum – Space as thermodynamic tension. Rahm proposes an architecture as meteorology and atmosphere. Two poles of heat – one 16° the other 22° Celsius – create a thermodynamic imbalance. The entire museum is composed of a multitude of climates and flow between the two poles. The placement of the colder pole at a higher altitude gives rise to a cyclic flow of air (warm air rises, cools and descends again). 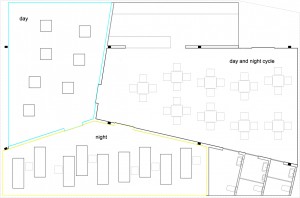 Split times café is divided into 3 cells: the natural day-night cycle, the day zone and the night zone. It gives the possibility of live in three temporalities. The zones are designed with colored glass (to force the hormones into day/night behaviors) and appropriate furniture. 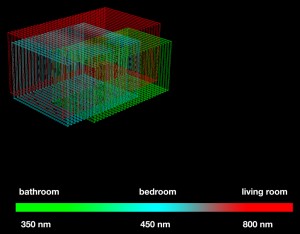 Ghost flat is a project of living in unknown dimensions. The room do not take shape in the spatial dimensions, but in specific fraction of the electromagnetic spectrum.