Roots is inspired by Pask’s chemical computer idea from the 1950s. Crystals grow in a liquid tank, make connections, and dissolve into clouds. I remember seeing it installed at transmediale 2007, being fascinated by it without being aware of the mechanisms underlying it. It has this visually haunting quality – the slowness of the growing process, the shades of crystals in the brownish liquid – that pulls you into a dream. And at the same time it is a constantly adapting cybernetic system that is made from almost pure matter.

The process is electro-deposition. Electrodes are immersed in an iron-sulfate solution. When electricity is sent through them, the iron-molecules grow dendrite-like at their ends trying to reach the oppositely charged electrode.

Electricity is pulsed through the whole Sculpture. It is the key to the constant transformation. Growth changes the flow of the current. The modified flow changes the growth.

The sculpture automatically creates it’s own feedback process. Materiality defines the rules. What is natural and what is artificial blends together. The sculpture is crafted by its own dynamics.

Together with Yunchul Kim or Agnes Meyer-Brandis, Roman has held a couple of workshops at schools in Germany and Sweden (Valand) that seem fascinating. They are experiments in mixed media and physical computing and are inspired by philosophy and science. 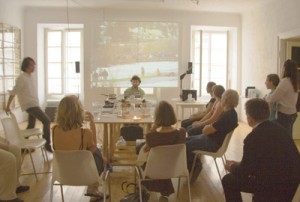 How to make water out of ice

In this performancelectures Roman and Yunchul Kim tell stories about ice adventures, present their experiments like freezing the liquid crystals in an LCD-screen and create ice-speakers in a workshop, that slowly melt away while playing the final scene of Solaris. Another materiality workshop was called How to make iron out of gold and presented at Piksel in 2007.

“Maelstrøm“ is an installation and a sculptural process inspired by Edgar Allan Poe’s short story “A descent into the Maelstrøm.“ Psychoanalysis, x-rays, and the cinema have redirected our gaze from things and from ourselves into the interior. However, interior phenomena are difficult to observe because we are either precisely at the center of observations or outside. This is similar with natural phenomena which are either too complex or too frightening to perceive them completely. “Maelstrøm“ attempts to take on both of these perspectives at just the point where things start to become unclear and foggy, when inside and outside world begin to become indistinct, when the flow of information, images, sounds, narratives becomes too large and material and form are no longer distinguishable from each other. Because that is precisely where we have arrived. The installation attempts to combine our experiences from the cinema with those of sculpture and painting with the help of a generative, material process. “Maelstrøm“ is an interior mirror of reality in which perception and dream, the visible and the invisible, the imaginary and the material come together.

text from paraflows – MIND and MATTER