A Compilation of Written and Directed Meta Worlds

Posted on April 13, 2012 by evsc
This is a compilation in the making. Suggestions are welcome.

Psychological Novels of the 19th Century

List taken from Hidden Minds – The History of the Unconscious by Frank Tallis. 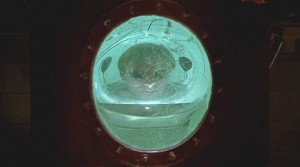 Altered States
Through sessions in a sensory deprivation tank and intake of hallucinatory drugs the protagonist explores other states of consciousness. Searching for an origin, the experiments not only change his state of mind, but also take over his physical body. He changes first into a proto-human, and at the end almost dissolves into a non-physical form of primordial consciousness. 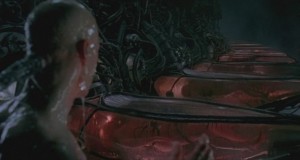 Matrix
While machines exploit human bodies for their energy, they send their brains into experiencing a simulated reality convincingly similar to typical middle-order reality. When freed from the machines, hackers tap into the simulation and learn to change the fundamental rules. Noise or glitches in the simulated reality (cat déjà vu) proof the world fake. 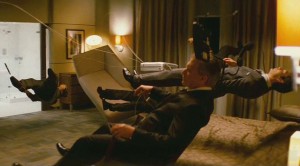 Inception
Characters share lucid dreams and experience a dream reality that is created by ‘the architect’ and filled with the subconscious of the others. Several layers of dreams-within-dreams are explored. The dream world is linked to reality by the sense for gravity and sound perception.
Dark City
Solaris
Ghost in the Shell
Videodrome
Being John Malkovich
Eternal Sunshine of the Spotless Mind
Jacob’s Ladder
Tron
Brazil
The Cell
Posted in Lists and tagged fiction, literature, movies.