A framed digital canvas takes you into the traditional art museum world. Small moving agents rotate around the screen and are told to construct paintings of the old masters. A constant spinning and whirling of lines on the screen results in a rather slow buildup of recognizable paintings. But as the small painting agents are bound to their inner algorithm, they have no memory, and often continue painting over their own drawing. This leads to a constant construction and destruction of the image. The canvas shows unfinished fragmented versions of the original paintings as a result and leaves the question of the ability to transport old art pieces into the digital domain. 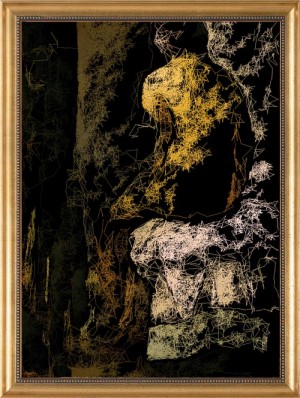 The program for this online version of ‘to spin art history’ was coded in processing. The main elements are the drawing agents. They consist of invisible lines rotating around a center point. They move on an invisible image based on their algorithm and leave traces on the way.

First every drawing agent is placed randomly on the screen. Mapping a pixel array to the screen every agent gets the color of the pixel he is place upon. Then the agents start rotating a short invisible line around their current position. At the same time they are constantly checking the color value of the pixel underneath the endpoint of the rotating line. If this color value shows a certain similarity to the color value of the center point, the agent changes its position and the endpoint of the line becomes the new center point. It continues his rotation movement until it finds another similar color. If it doesn’t find a similar color in a full 360 degrees rotation it changes its scanning radius slightly. This algorithm leads to the agent’s movement along similar colored fields on the original source image.

There are different versions of traces the agents leave along their way. In one version they draw every step of the invisible spinning line, in another they only draw the connection from the old to the new center points. Another version only leaves point traces along every end point the agents are scanning.

Changing the parameters of the agents, like their radius value, their rotating speed or the threshold for color similarity, every setup produces different visual outcomes. Based on the construction and the color schema of the images used for the implementation, different results emerge.

If the image consists of strongly distinguished color fields the agents tend to move along the outlines of those color fields. They seem to draw the forms of recognizable elements before filling them with color. Strong borders between color fields are visible. If those colored fields are rather small, the rotating agents tend to jump over them, leaving destroying traces on their way. This leads to a constant construction and destruction of elements in the painting. The outer agents build bridges over smaller different colored fields and the agents in those fields try to destroy those bridges by painting over them again. Another behavior emerges if the color similarity of neighboring pixels is too low. Then the agents sometimes continue spinning around themselves without finding new center points. The visual results are slowly growing stars and spirals.

Different agent settings on different source images can lead to easily recognizable or completely destructed fragmented results. Sometimes only the color scheme of the resulting abstract image gives a hint about what the original source was. After a while the agents begin drawing another image. They are left on the same position, but get assigned a new color value and a different tracing mode.

A database of digitized famous paintings was chosen as source for the drawing agents. The selected paintings from artists like Caravaggio, Gauguin, Klimt or Seurat give the data for construction for the drawing agents. The artists’ freedom of reinterpreting what they see and composing real life out of glimmering dots, violent brush strokes or geometric forms becomes mirrored in the computers struggle of reproducing visual information. The program displays what it is told to reproduce in its own algorithmic way. The original scanned art print transforms into the person posing for the artist – the program’s code relates to the artist’s subjective selection of colors and forms – and the visual output on the screen becomes the artists output on the canvas.

The program, showing the construction and destruction of the famous art images in a traditional art museum framing, leaves the question of the ability to transport old art pieces into the digital domain. The digital agents are programmed to paint and they are fed with information about real world paintings. Nevertheless they fail in their attempt to reconstruct the same painting. Bound to their algorithmic behavior and their inability to actually ‘see’ a painting they construct their own version of it. Compared to the original the outcome of this program is of course highly different, because the code behind it is rather simple. But even a high quality digitization of art is also bound to code and algorithms. More advanced code will be able to erase certain errors and create better results, but code is still code and very different to oil and water. Converting something as material as paintings made of oil or tempera into something that can be understood by a computer seems to be impossible. Some information gets lost, some information gets mutated. 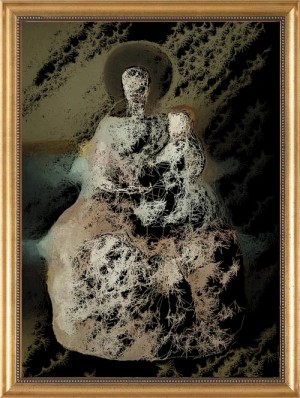 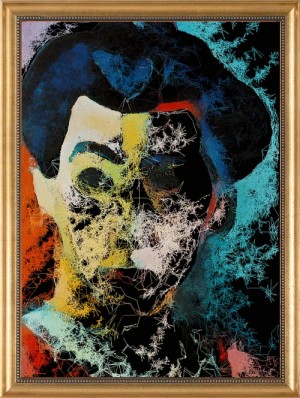 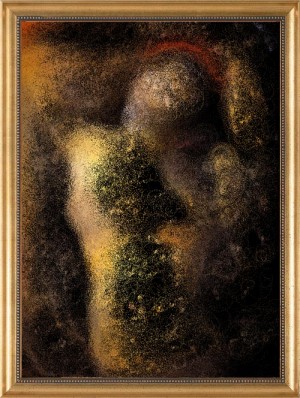