A Time of its Own

Clock objects – electronic toy and thought experiment at once – let us encounter the exaggerated effects of motion onto time within the limits of our perception. Interaction with these clocks challenges our our common sense understanding of what time is and shall provoke new thoughts.

This is a project in the making. 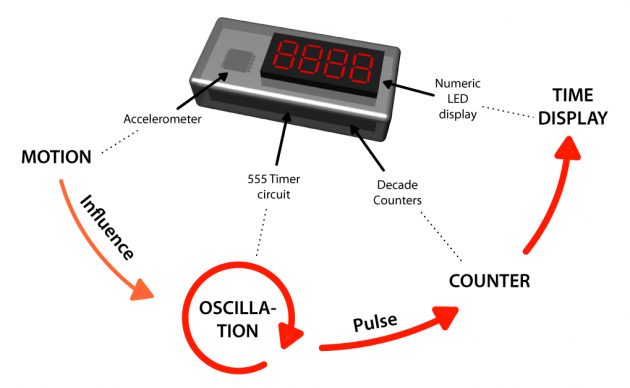 The object consists of an acceleration sensor, a timer- and counter-circuit and a LED display. The analog charge- and discharge-cycle of the 555 timer circuit represents true parallel oscillation similar to time-keepers in nature: the resonant frequency of the cesium atom in atomic clocks, the circadian rhythm cells responsible for the human biological clock or the planetary motion in orbits around the sun. The measurements from the accelerometer lengthen or shorten the pulse interval of the timer, in similar yet heavily amplified manner as special relativistic time dilation (The faster the relative velocity, the greater the magnitude of time dilation.) Counter circuitry displays the current time for the object in deciseconds.

The clock objects will be powered by batteries so that they can be freely moved around the space. Free hand movement, acceleration and deceleration, will change the clock frequency and show the influence of motion onto the passing of the objects time. Of course, changes in the passage of time can only be acknowledged with relation to a frame of reference. Therefore several clock objects will be manufactured that allow the constant comparison between their time displays. 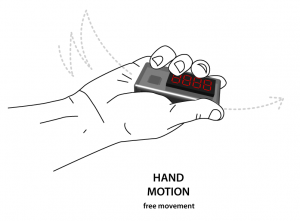 Moving the object through space changes its acceleration and therefore its own time.

A future installation plan to exhibit the clock objects is the creation of a space that holds several time-objects, all at relative motion to each other. The clocks will be put into motion through mechanical (or human) actuation. Fixed to springs, pendulums or motors – the space will represent a chaos of time and highlight the importance of a reference frame – the importance of relativity – to our understanding of time and reality.

Synchronization is important for witnessing the effects of motion on the clocks. A docking station for the battery-driven clocks will allow to synchronize them with a reset pulse sent simultaneously to all objects at once.

Several time objects moving at different oscillating patterns create a chaos of time, held together by a not-moving reference clock.

A docking station allows to sync all the time objects to a common starting time
Posted in Research and tagged accelerometer, electronics, motion, time, timer, toy.