How Psychoanalysis is in fact Neuroplastic Therapy!

The ninth chapter in Norman Doidge’s book “The Brain That Changes Itself” is called Turning Our Ghosts into Ancestors – Psychoanalysis as a Neuroplastic Therapy. He tells the story of a man suffering from depressions and difficulties in relationships for over 40 years, that can be linked back to his mother’s death when he was only 26 months old. Even though the man has no memories of that period of time, the events left marks in his brain and resurface in dreams, moods and behaviors. In a recurring dream of loss he constantly searches for something, yet never finds it.

Through psychoanalysis the man learned to understand the reasons behind his depressions and difficulties, that the loss of his mother is hardwired into his subconscious and effects every aspects of his life. Talking therapy slowly helped him to re-wire those parts of the brain that represent his trauma by reinforcement of positive thoughts and associations. His path to recovery was evident in the nature of his dreams. If the underlying neural network is unchanged, the dream sequence will be the same every time. Yet differences in the nature of the dream represents rewiring of the neural network.

Dreams can show how the mind and the brain slowly change. 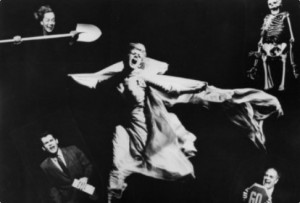 “The newest brain scans show that when we dream, that part of the brain that processes emotion, and our sexual, survival, and aggressive instincts, is quite active. At the same time the prefrontal cortex system, which is responsible for inhibiting our emotions and instincts, shows lower activity. With instincts turned up and inhibitions turned down, the dreaming brain can reveal impulses that are normally blocked from awareness.”

The Prefrontal Cortex is the region of our brain responsible for higher level thoughts, definition of goals, decision making, expression of personality and moderating correct social behavior. It orchestrates our thoughts and actions in accordance to internal goals and regulates emotions and instincts. 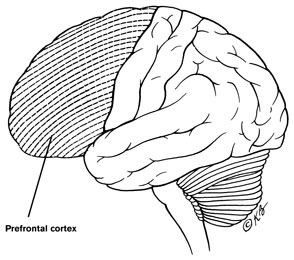 Why do we dream?

Sleep and particularly REM sleep (the dream state) facilitate plastic change. The higher the plastic change is in the brain, the better we are at learning and storing memory. Therefore a good night’s sleep enhances our ability to remember and enforce new skills. Tests show, that if deprived of REM sleep our brain has a harder time facilitating normal neuron growth and turning short-term memories into long-term ones.

The sleep phases during a whole night of sleep. REM = Rapid Eye Movement.

“But why are our dreams hallucinations, in which we experience things that aren’t happening as real? When we are awake, we first take the world in through our senses. For vision, input comes through the eyes. Then the primary visual zone in the brain receives direct input from the retina. next, the secondary visual zone processes colors and movement and recognizes objects. Finally, a tertiary zone further down the line of perceptual processing (in the occipito-tempero-parietal junction) brings together these visual sense perceptions and relates them to other sensory modalities. Thus events that we have concretely perceived are related to each other, and once that happens, more abstract thought and meaning can emerge.

Freud argued that in hallucinations and in dreaming, the mind “regresses.” By this he meant it processes images in backward or reverse order. We begin not with perceptions of the outside world and then form abstract ideas about them, but with our own abstract ideas, which become represented in a concrete, often visual way, as though they were perceptions happening in the world.“

Neuropsychoanalyst Mark Solms found in studies, that the act of dreaming stops if damage occurs to those tertiary zones (OTP – occipito-temporo-parietal junction) that generate abstract thought. He also undertook studies of people with damages to brain areas concerned with visual imagery, and discovered that those people would dream in sounds and not in visuals. Similarly blind people, that have been blind since birth, have only auditory dreams. This proofs that dreams are not just confusing visuals images, but originate from thoughts and ideas. Our dreams are foremost “thinking dreams” that associate to visual images and sounds. 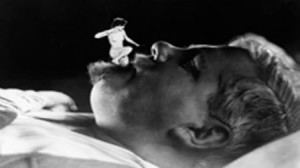